The economy is a system for distributing limited resources. Confused? Keep reading.

Economists say economics is the study of scarcity. That’s because resources, such as workers, land and raw materials, are limited - while the demand for them is infinite. Basically, we always want more.

So the textbook answer is an economy is a system for distributing scarce resources. And when we talk about ‘the’ economy, we usually mean the UK’s economy.

In some countries, the government chooses what to produce, how much and for whom. In others, it’s determined by what people want to buy, and how much businesses can provide – supply and demand. 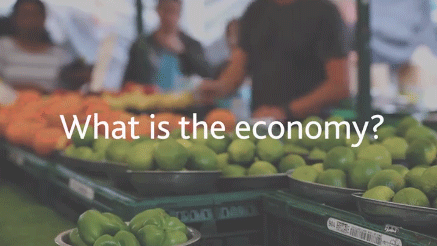 What’s your role in the economy?

The economy can seem hard to pin down, but we all shape it through our choices. You’re contributing to it every time you buy something or go to work. And it also has an impact if you choose to spend or work less. What everyone does with their money can determine how the economy is doing. Which brings us to…

How can you tell if the economy is doing well or badly?

People use many expressions to describe the economy. They say it’s healthy, thriving or in a good place. In bad times, it’s weak, struggling and depressed. Perhaps it can feel hungover too?

Four things give you an idea of how the economy is doing:

What’s the Bank of England’s role?

Our job is to make sure inflation is around 2%. We do this mainly by influencing interest rates (the amount you pay for a loan or how much you get on your savings account).

We also keep an eye on any threats to the economy and step in when we can. This can be anything from cyber-attacks on banks to the size of people’s mortgages. Learn more about what we do.

Why are interest rates in the UK going up?

Why are interest rates in the UK going up?